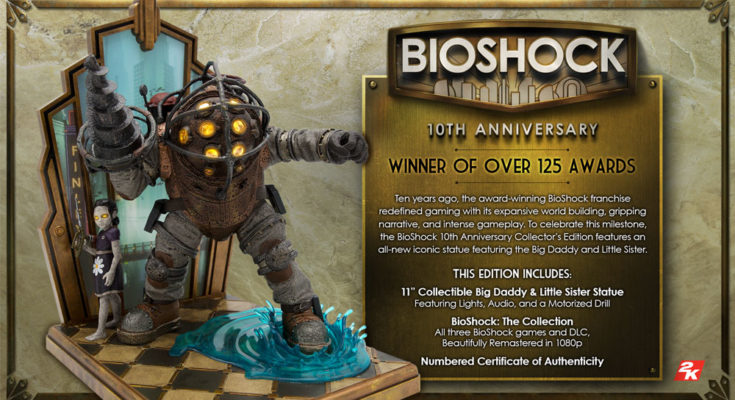 Bioshock has just celebrated its 10th Anniversary by releasing a special collector’s edition that includes all three games plus DLC  remastered in 1080p along with an 11 inch Big Daddy and Little Sister statue. The statue comes with a numbered certificate of authenticity and features lights, audio, and a motorized drill. You will need to supply the statue with 4 AAA batteries for all the features to be operable which includes off mode, just the lights, and lights plus audio. The collector’s edition can be purchased at Gamestop and the 2K store for $199.99 and is available on Playstation 4 and Xbox One. 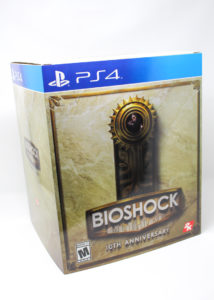 Once you open up the top you will find the Bioshock: The Collection game and a certificate of authenticity nestled in-between some high density Styrofoam. The certificate is a nice touch and includes embossed lettering and the number of your statue. I wish more collector’s editions included certificates like this one to really make you feel like you purchased something exclusive. 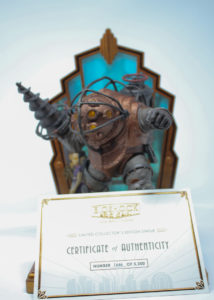 The main attraction for the die hard fans  is going to be the 11 inch Big Daddy and Little Sister statue designed by Idea Planet. The statue weighs in at 2lb 12oz and is made from a variety of materials. The LED lighting of the eyes, little sister audio, and moving drill really makes this statue stand out from the rest which is why it will now be a main feature in my statue cabinet.

Overall this collector’s edition does not include any of the traditional items that we are used to receiving like an art book, cd, or collectable in-game items but for those wanting an exclusive piece of the game to display on your mantel then this is definitely a must have.  I will give this Collector’s an 8/10 and would say Buy if you are a fan of the series.