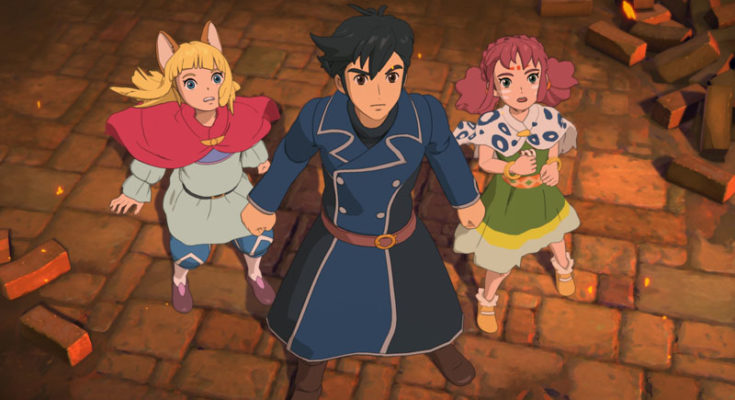 Ni No Kuni II: Revenant Kingdom Collector’s Edition has finally been released alongside numerous other region specific special editions which you can find out more about here. So lets delve into whether or not this collector’s edition from Bandai was worth the $200 price tag. 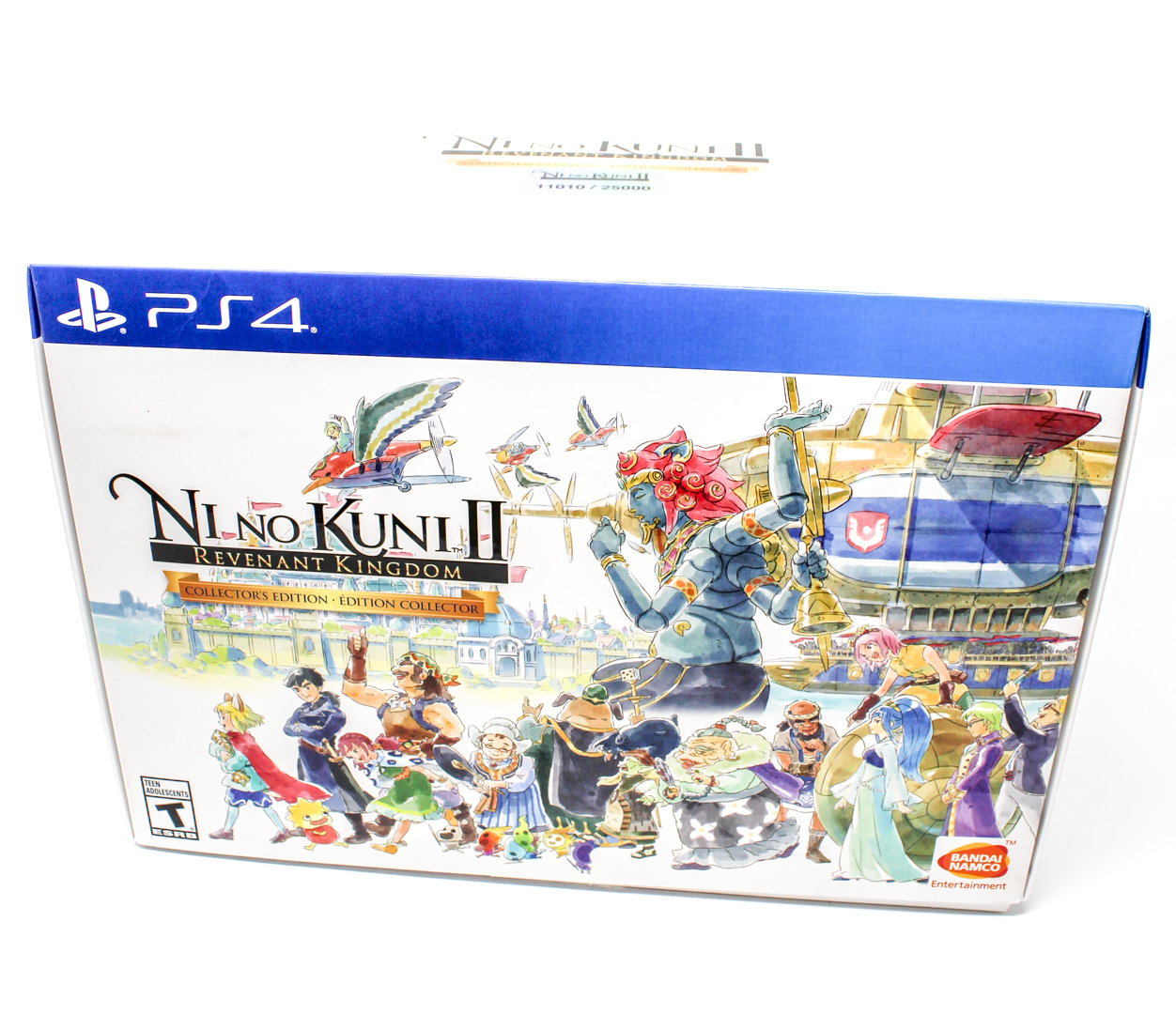 The box is made of a medium density card board and is 13.5″H x 9.5″L  x 10″D. The top has a sticker letting you know what number your collector’s Edition is from the 25,000 released. Once you slide the lid off you are greeted by numerous goodies, nicely packed if I must say. 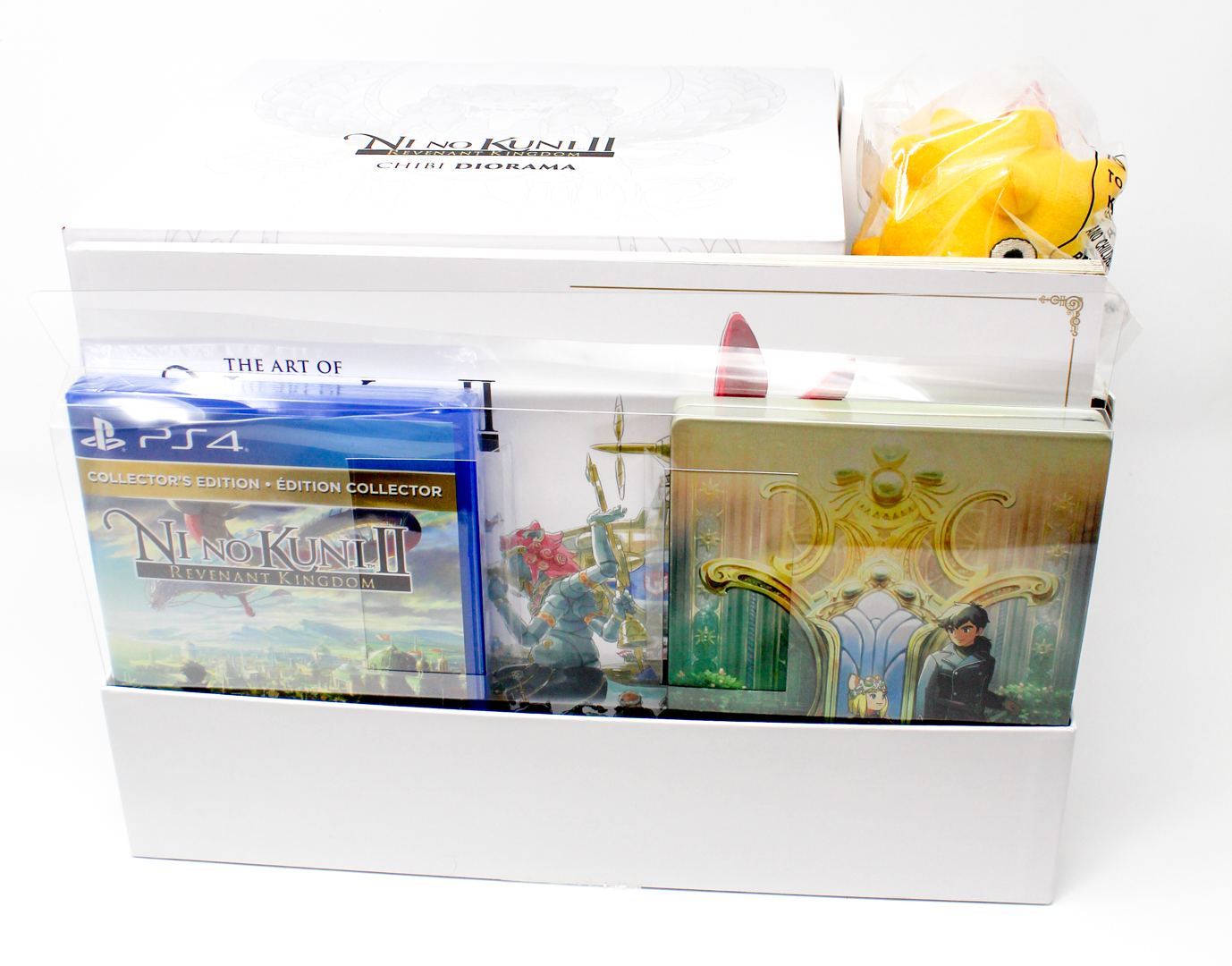 On the left you, will find the collector’s edition Ni No Kuni II game and next to it an accompanying SteelBook containing the “Making of” Blue-Ray documentary. Further back there is a soft cover art book, a chibi mechanical diorama, a Lofty plush, , and a 3D paper craft display case. 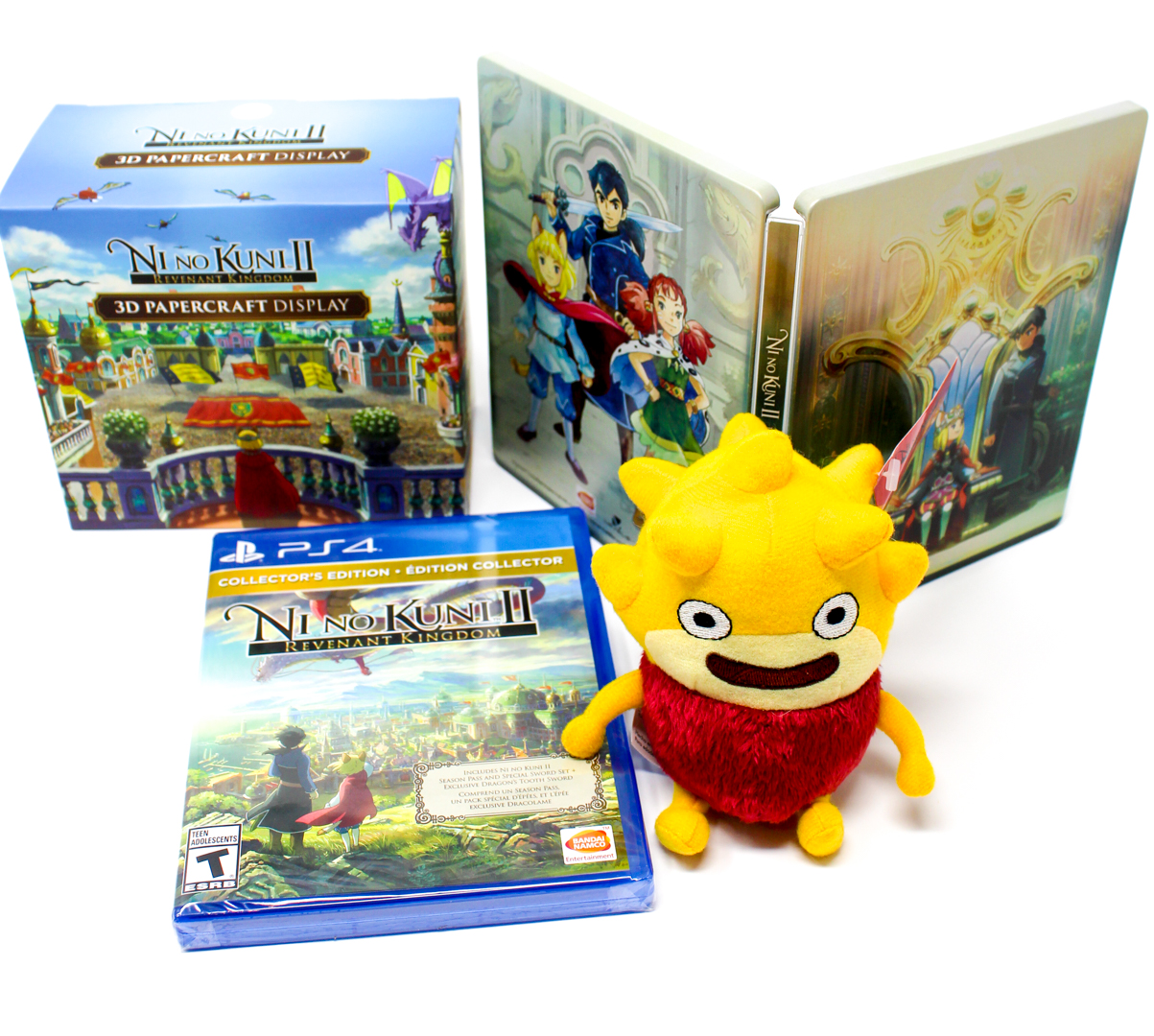 The art book I wish was hard back like many other premium collector’s editions around  price tag but we will have to make due with the nice character, monster, and scenery drawings. 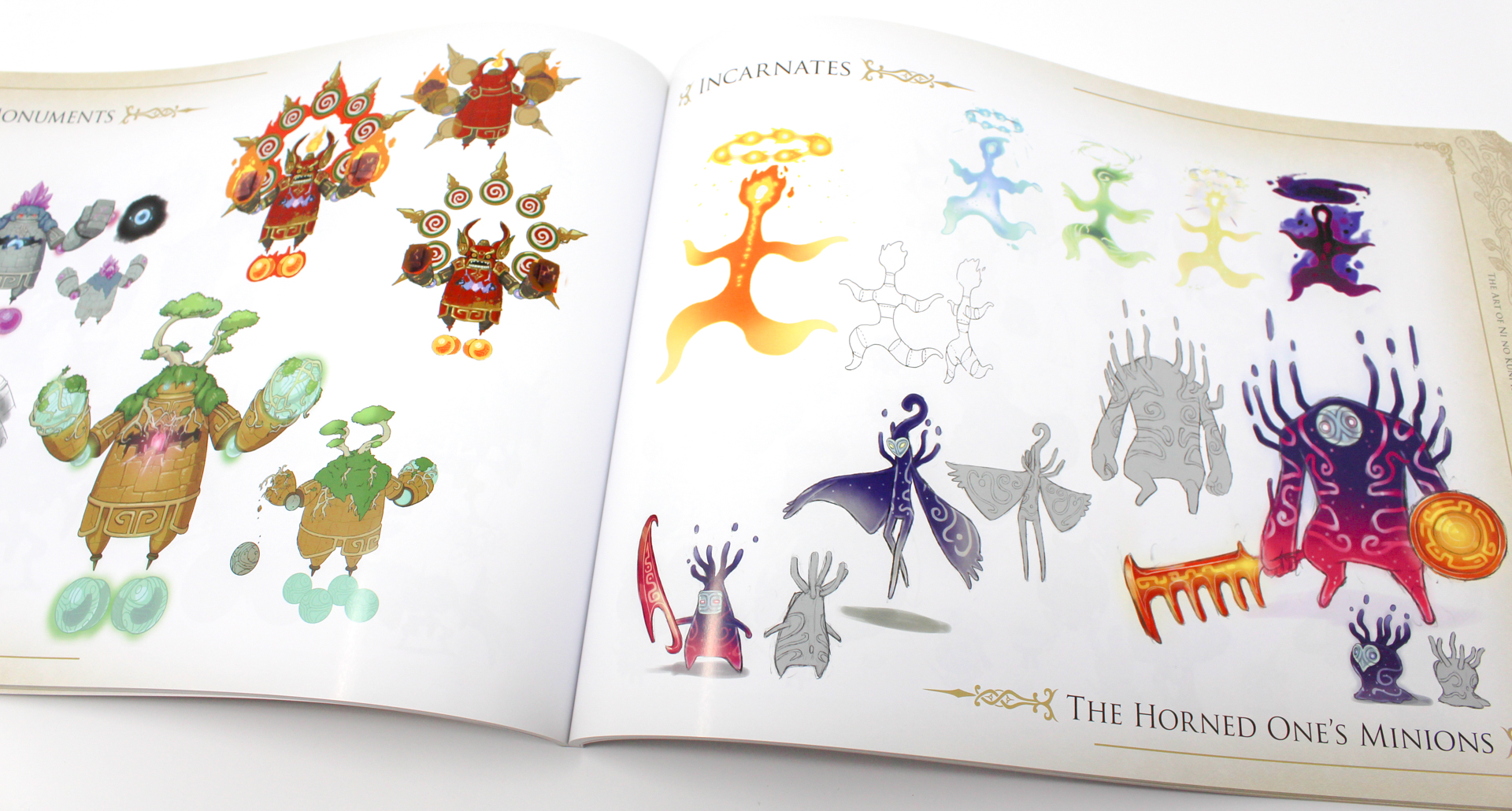 Lastly, we have the diorama which I wasn’t sure how it would work when I first wrote about the collector’s being released. So the diorama is made of a hollow plastic and contains a wind up switch much like musical snowglobes with a small on/off lever. The yellow monster, LongFang, attaches on to a peg and two soldiers are magnetized to the base. When the switch is turned on, the two soldiers circle around LongFang and the rest of the group for a couple minutes before the diorama needs to be wound up again. 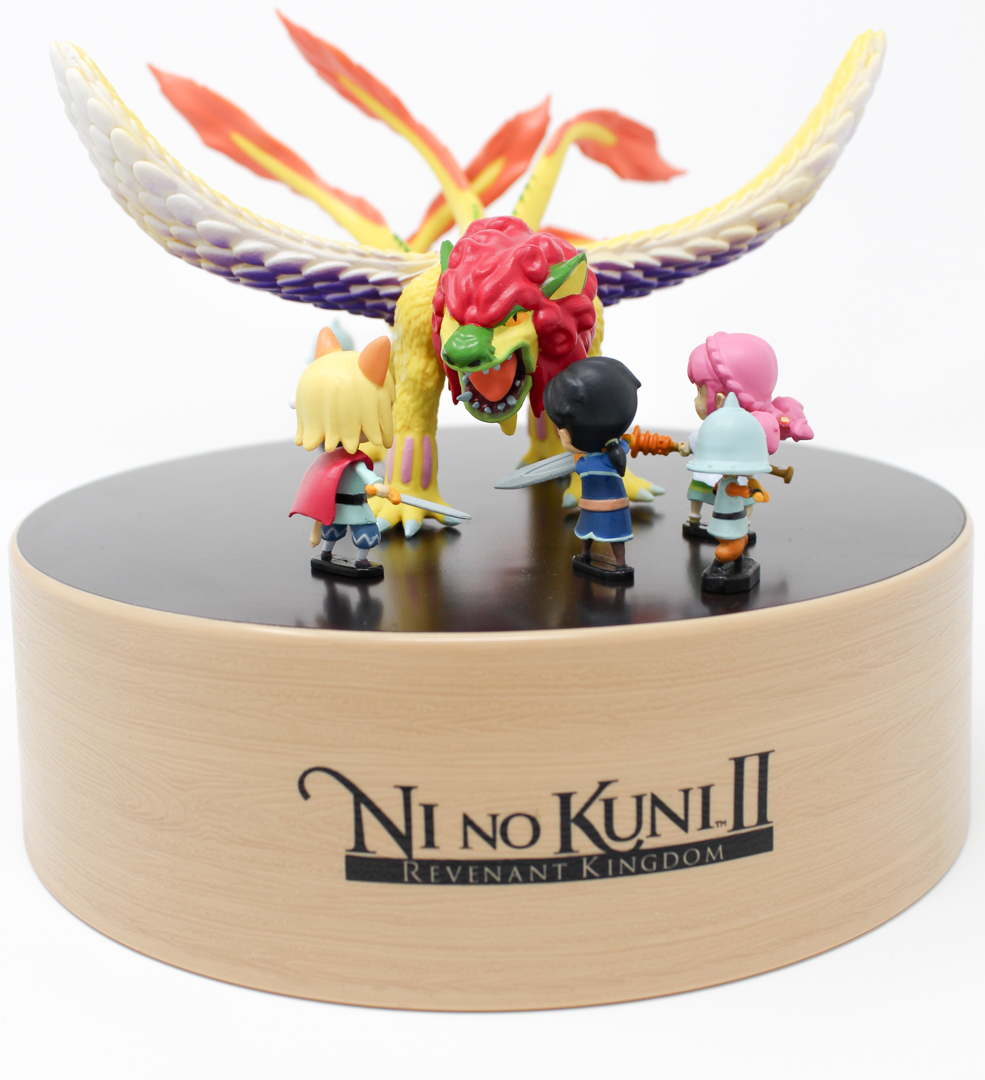 So is this collector’s Edition worth the $200 price tag? I would have to say probably not. The amount of items in the collector’s is nice but the quality is lacking. Much like the previously reviewed Monster Hunter Collector’s, I am not impressed with poorly made figures. The LongFang figure is another poorly made plastic molded figure with little texture detail. The smaller figures are a bit nicer but I wish they were not attached to the diorama. The art book should have been a hard back but I will say that they at least included a decent amount of pictures. The SteelBook is nice and I liked the “Making Of ” Blue-Ray. However, putting in a 3D paper craft product just makes the whole thing feel pretty cheap. If you are looking at snagging this Collector’s, I would say wait until the price drops to around $120. My rating of this Collector’s is solid 7. Thanks for dropping by and please leave me your thoughs and opinions below! Happy Gaming my friends, Till Next Time!