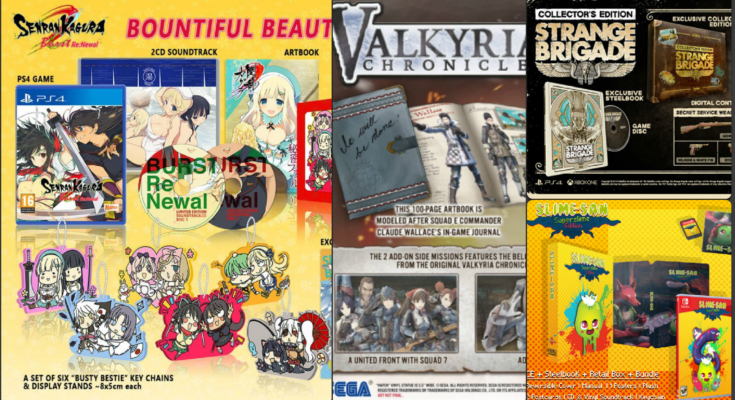 There are currently so many new upcoming collector’s editions that I figured it would be best to make one huge blog post to cover them all. These are not your triple A games that everyone knows but they may be worth a look at if your interested in trying out something new. 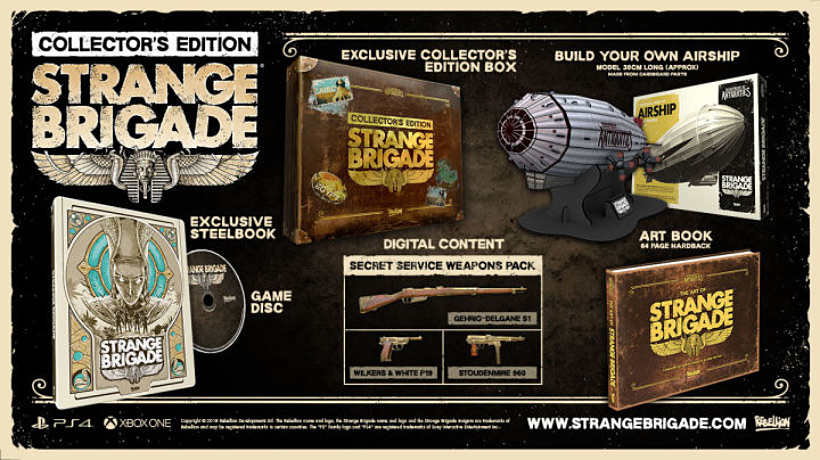 First off, we have Strange Brigade, which is a 1930s-era, co-op adventure game in which players go up against “an army of mummified monstrosities hell bent on terror” The game is currently up for pre-order and will be launching August 28th for the PC, PS4, and Xbox One. For Console players there will be a physical Collector’s Edition retailing for $79.99 that includes a steelbook case, secret service weapons pack DLC, airship model, 64 page art book, all inside of an exclusive suitcase design and sleeve box. 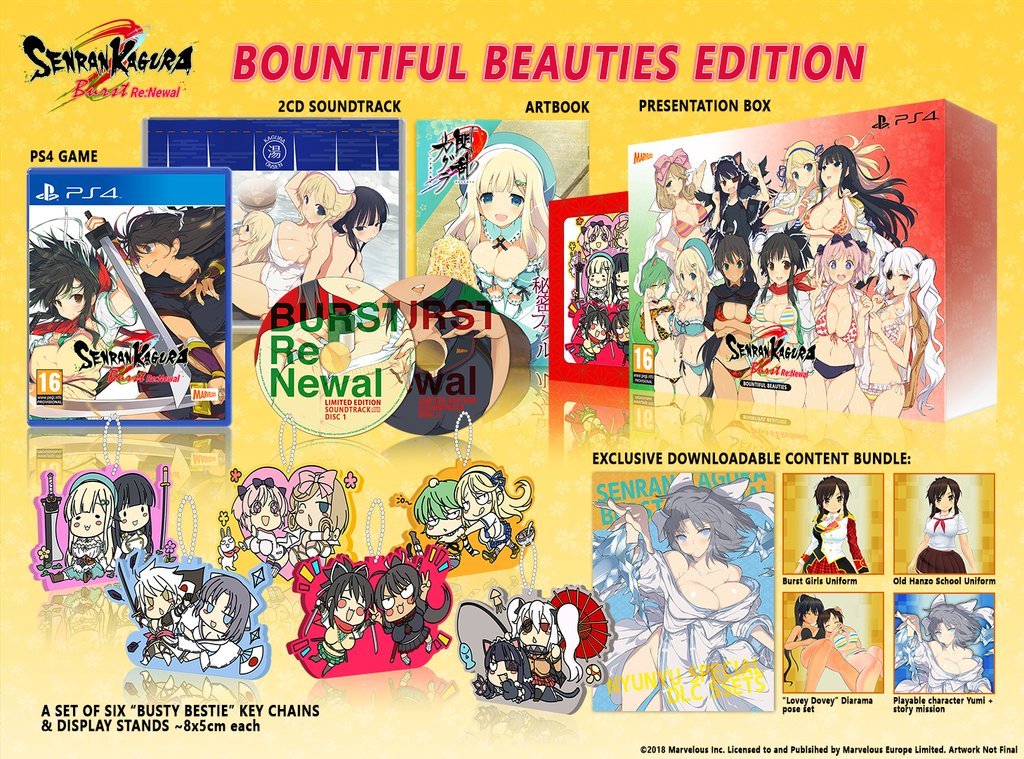 Next we have an Senran Kagura Burst Re:Newal which will be launching this Fall for PS4 and PC. Unfortunately, this Collector’s Edition will be a Europe exclusive at the Marvelous Europe Store, but for those of you who import games, this edition will run ~$106 and includes the PS4 game, soundtrack collection, artbook, 6 “Busty Bestie” keychains with display stands, and a DLC voucher for the Burst Girls Uniform, Old Hanzo Uniform, “Lovey Dovey” Diorama Pose, and Playable Character Yumi and Prologue Chapter. 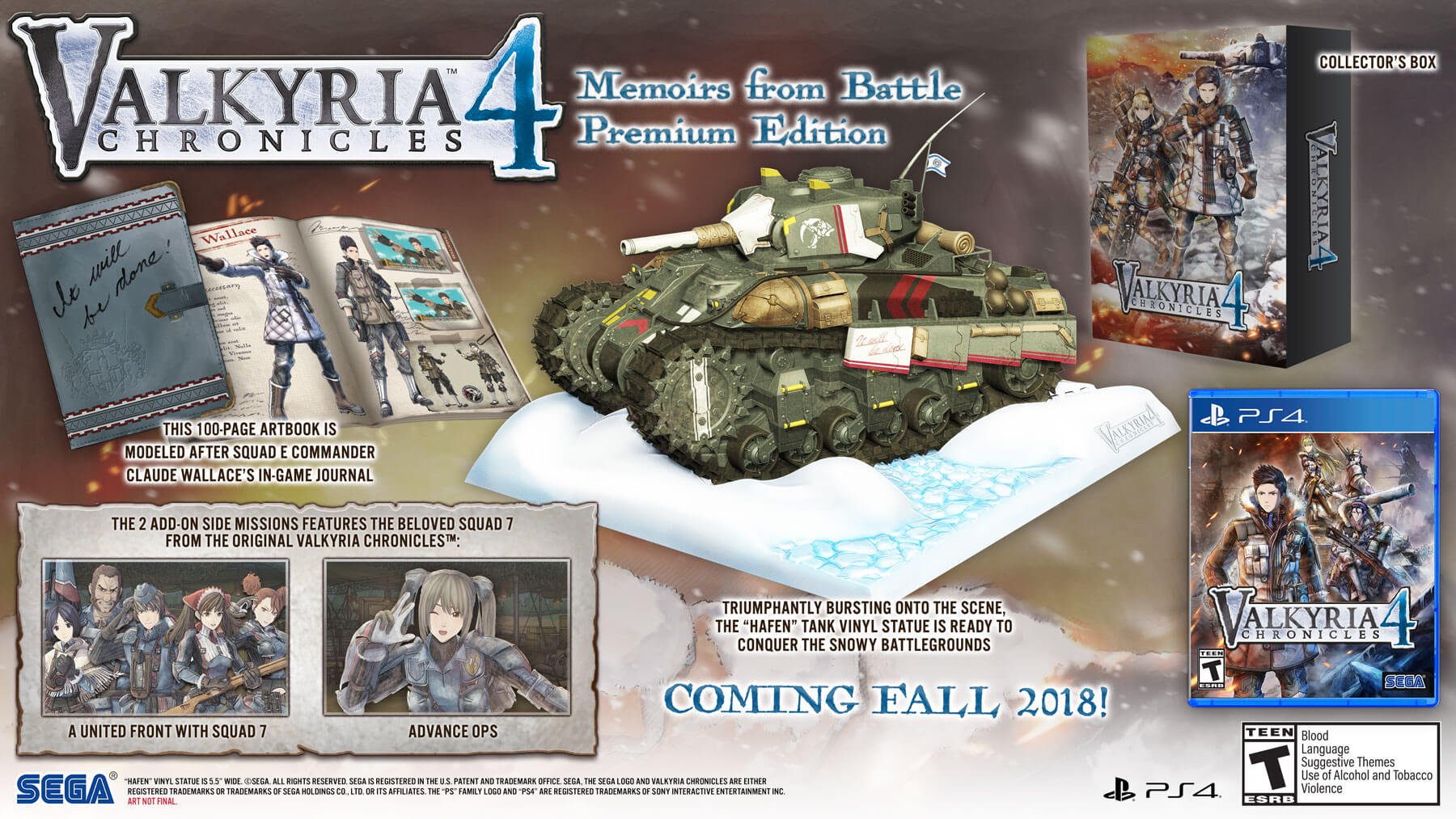 Valkyria Chronicles 4 is slowly making its way closer to its Western release and along with it a pretty interesting collector’s Edition. While there still isn’t a firm release date, the “Memoirs from Battle” premium edition costing $99.99 is equipped with an exclusive 100 page artbook themed as Claude’s travel journal from the game and a replica vinyl statue of his mighty tank, the Hafen.

Lastly, if your interested in a physical release of Slime-San from Limited Run Games then this next collector’s edition may interest you. The sale will begin Friday, June 8th at 7:00 a.m. PT | 10:00 a.m. ET for the Collector’s Edition that contains a steelbook, retail box with reversible cover, (cartridge and manual inside), two postcards, CD soundtrack, poster, and keychain. There is also a Slime-San plushie and a vinyl from Black Screen Records that can be bundled with the Collector’s.

As always, thank you for dropping by, leave your comments below, and Happy Gaming my Friends!