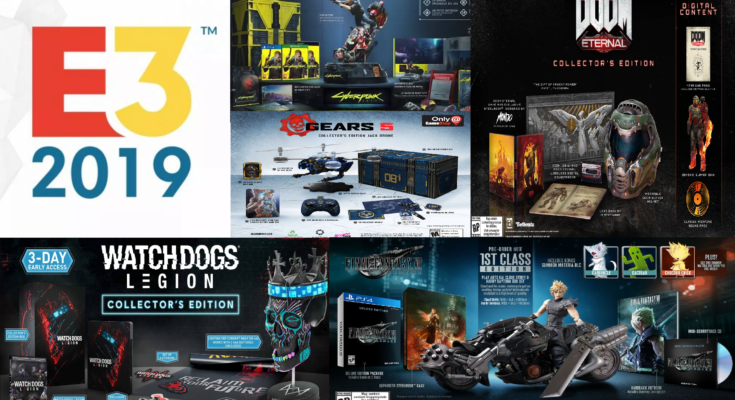 This page will be regularly updated with all the announced Collector’s Editions following E3 2019.

CD Projekt Red delivered a new trailer for the highly anticipated Cyberpunk 2077 at E3 today that is set to release on April 16, 2020. They are the same publisher that brought us the amazing Witcher 3 Collector’s four years ago. This $250 Collector’s will be including a statue, game soundtrack, Steelbook, stickers, a hardcover art book, a Night City postcard set, world compendium, Quadra V-Tech keychain, embroidered patches, a pin set, a map and guide to Night City, and more. Pre-orders are already up and I expect them to sell out quickly so hurry up and pre-order if this Collectors interests you.

If the future Cyberpunk World does not interest you Microsoft has announced a Gears 5 Collectors Edition that is slated for release September 10, 2019. This Gamestop-exclusive Collector’s Edition will cost $270 and includes:

Bethesda has just announced that there will be a Doom Eternal Collector’s Edition releasing November 22, 2019 for $200. If your looking to pre-order you can already at the Bethesda Store. This edition will include:

Ubisoft’s E3 2019 press conference today confirmed that their is going to be another installment to its Watch Dogs franchise ” Watch Dogs Legion ” which will release March 6, 2020 for Playstation 4, Xbox One, PC, and Stadia.

Square Enix also dropped a Collector’s Edition today for its upcoming remake of Final Fantasy 7. This Collector’s will be a Soft Bundle, which means that the Final Fantasy VII Remake Deluxe Edition are bundled separately from the Play Arts Kai Cloud Strife and Hardy Daytona. The remainder of the contents are Sephiroth Steelbook Case, Hardback Artbook, and a Mini Soundtrack CD. If you pre-order now you will also recieve the Summon Materia DLC. The Collector’s is listed as the 1st Class Edition and can be pre-ordered through the Square Enix Store for $330.

What is your favorite Collector’s announced so far. Let me know below and as always Happy Gaming My Friends!